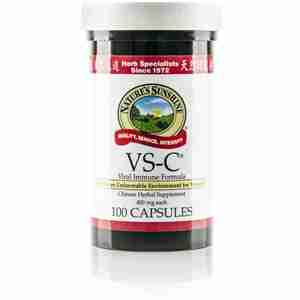 This immune-supporting formula is a combination that Chinese herbalists would describe as a “metal-enhancing” formula. These herbs create a favorable environment for microbial balance and overall health. Dandelion root has nutritive properties for the liver, kidneys, stomach and blood. Purslane tops were eaten by American pioneers and in the Orient in the belief that it nourishes the liver and blood. Indigo leaves and root were used traditionally to support detoxification processes. Bupleurum root is a Chinese bitter herb that nourishes the liver and promotes perspiration. Typhonium rhizome supports the respiratory system. Scute root has been used to support the gallbladder and spleen. Cinnamon twig benefits the intestinal tract. Licorice root adds harmony and nourishes the adrenal glands. Ginseng root is a well-known adaptogen, promoted as a general body builder.

VS-C is alsoavailable in liquid form, with the components of its dried counterpart extracted and preserved in a glycerin base.

NOTE:Pregnant or lactating women should consult their health care professional prior to taking this supplement.

There are no reviews yet.

Be the first to review “VS-C Capsules, 100 Capsules” Cancel reply

©2020 JennScents, Inc. All rights reserved.   Terms & Conditions   Sitemap
Web Development by Balefire Marketing + Advertising
The statements made on this website have not been evaluated by the FDA (U.S. Food & Drug Administration). Our education, products and services are for educational purposes only and not intended to diagnose, cure, prescribe for or prevent any disease, nor replace professional medical guidance. If a health condition persists, please contact your physician or licensed health care provider. The testimonials shared are from individuals and are not a guarantee for the same results.
Create a new list